“If you walk around the corner, your hostel will be just there,” said the bus driver as I looked at him with confusion. With a bag on each side of my body I started walking unsure of where I was going. I paused for a moment, closed my eyes, took a deep breath of the fresh Icelandic air, and headed towards the door to the Loft Hostel. I looked at the stairs and realized that reception was on the third floor. Exhausted from the long journey and the weight of my bags, I slowly made it up the stairs.

Unfortunately, once I got to reception, they told me that I’d have to wait to check in because it was too early and that my room wasn’t ready. I sighed and asked if I could put my bags in storage. I then decided to sit down in the social area with my lap top and map to figure out what I should do during my four day stop over before I head to London.

While I was doing some research, a guy approached me. He introduced himself as Tod. Surprised by his accent, I just knew he was from The US. Which he was, he came from California and just like me, Iceland was the beginning of his long world adventure. After a good conversation sharing travel plans he asked me if I’d like to go on a walk and explore the city for a bit. I closed my lap top and happily agreed. 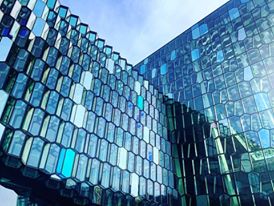 The Loft Hostel is located on Bankastrataeti street near Austurstraeti and Laekjargata. Which happens to be a perfect location as far as walking by shops, restaurants, some cool pubs, and interesting stores in the downtown central area. While we were walking we decided to head towards the water. Tod had a degree in architecture, so when the Harpa Concert Hall attracted his attention, I had no objection going to see what it was all about. The structure of the concert hall reminded me a lot of a bee hive, covered in glass windows that reflected different colors depending on where you stood to look up at it.

Daringly, we decided to walk inside and realized that an event was going on. Turns out, we happened to be in Reykjavik during a huge Comic Con event that was being hosted at the concert hall and various locations around the city. The views from the interior of the building was absolutely stunning. You can see the bay, along with some ships, and mountains in the background. I turned to Tod, grabbed his arm, and smiled as I said, “come on lets explore more, lets not waste time!”