For a while now, I’ve had this unbearable hunger to travel. The nostalgia of my last adventures overwhelmed me. I gained a sense of urgency to escape from the box I forced myself in. To fill the emptiness – the void deep within myself. I felt stuck; I needed to spread my wings and fly. To feel alive again.

On Thursday, I found myself sitting on a flight to Chicago in the center of two giant men. Never in my life have I felt so small, but so secure at the same time. I felt at ease; a type of peace I can’t describe. The void I felt disappeared and the light in my eyes grew bright.

As soon as I landed in Chicago my anticipation grew. My curiosity filled my head with activities I wanted to do. What I should do. What my cousin and I will do. With such a huge layover, the only thing that occupied my mind was my desire for wanderlust. To enter a place so foreign to me, so unknown, a mystery left for me to decipher. It felt terrifying, but exhilarating at the same time. The adrenaline, my heart racing, my blood pumping, my breath increasing. I felt vulnerable, I felt human, I felt alive.

My next flight to Hong Kong, which would hold me off for 16 hrs killed me. For the most part I was able to sleep it off, but I’d wake up and I’d grow anxious. I found myself watching Andrew Zimmern on the tv provided for us and I started scribbling down some notes. Before I knew it the pilot said, “we’ll be landing in about 10 mins.” I was a kid in the candy store, a dog waiting for her treat: antsy and excited.

As soon as we landed into Hong Kong I could immediately feel the humidity, which I was used to by now from living in Charleston. The sky was grey and the clouds sprinkled a little rain. I took a deep breathe and I realized I wasn’t in Alaska anymore. I was on Asian soil and it felt like a dream. I’ve been talking about China for a year now: it felt surreal. 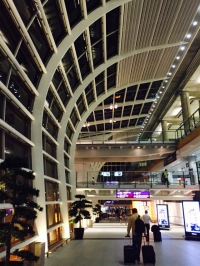 I got in before my cousin did, so I sat there and waited. After almost 2 hours her flight finally arrived. (Her flight from San Francisco was running behind.) Once we met up with each other, we left customs and headed towards the red Urban Taxi that would soon bring us to our hotel: Hotel Icon. On our way there we drove by many tall buildings that would fill the dark sky of light, of life.  Discussing the skyline, my cousin and I decided that we would need to find the tallest point of Hong Kong to admire the city from atop.

Finally arriving our hotel, we were greeted by the friendliest bellman named Henry. He gladly helped us with our bags with such enthusiasm that comforted me. As I walked into the hotel, the first thing I noticed was the wall that was decorated by green leaves of all sorts of varieties. It brought such a cool ambiance in the room that brought rustic to modern. It was hip.

After checking in and getting our room keys, my cousin and I found ourself on the 18th floor, which would soon lead us to our room. We walk in and immediately notice the view from the window. It was amazing, Hong Kong was alive. When we settled in, we decided to walk a little to find something quick to eat so we can return to the hotel for some shut eye before our early morning tomorrow.

We walked down to the lobby where Henry greeted us. He directed us toward the local food street where we would find ourselves in the middle of variety of foods. The first thing that caught my eyes weren’t the bright lights, but the fish balls on a stick amongst other native foods. For a while now, I’ve been craving these, so at that moment I knew what my first meal in Hong Kong would consist of.

Henry mentioned to us that a restaurant called, “Tsui Wah” is a good place to eat at this time of night, which was approximately 2200. As we walked down the street we finally found his recommendation, after looking at the menu, I stared in hesitation. I suggested that we kept walking to see what other options there are. My cousin agreed and we walked further down and turned left. Many tables were filled with people laughing and socializing while drinking beer. A soccer game was on several televisions, which I found the majority of the crowd were tuned into.

Focusing on the sea of people having a great time I could hear chants for one of the teams to win. Along with this you can hear children playing in the distance. Together these sounds played a perfect harmony. It was the sound of happiness. The sound of bliss. It was beautiful. The natural music of humanity enjoying that exact moment at that time.

It made me smile. Realizing that this corner didn’t have a huge selection of restaurants or food vendors. We decided to head back towards Tsui Wah to dine there. In a sense it reminded me of what would be a diner in America. Their menu consisted of a little bit of everything. With fish balls in my mind, I already knew what I wanted.

My cousin and I looked over the menu for what seemed like 30 mins. I decided I was going to get the fish ball and fish cake noodle soup. To share with my cousin I ordered shrimp and spinach dumplings and fried French toast with ice cream. She ordered a spare rib noodle soup and some milk tea. It took us a moment to realize that when we were ready we had to raise our hand.

I did this hesitantly because working as a server/bartender in America I would have found this rude and insulting. It just reminded me of the differences in cultures in societies, but for a reason it seemed to make sense to me. We did a lot of pointing, which we found out we shouldn’t really do. Shortly after, our soup arrived and my craving for these delicious fish balls vanished. One bite and I felt at home.